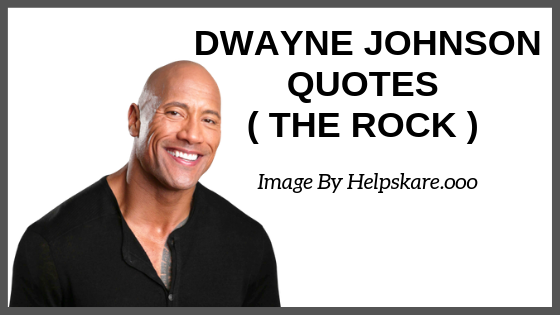 The Rock Quotes On Winning :

What was important to me was entertaining the audience, and whether that meant winning, losing, singing, or whatever it was on the live show we were doing every week, which was awesome, I was game for it.

I had no coaching. I came out of the world of pro wrestling. In that job, there are no agents, no publicists, no media training. It’s just you and the crowd, and you have to be real to win them over. And if you don’t, you’re not gonna eat. And that’s it.

In 1995 I had $7 bucks in my pocket and knew two things: I’m broke as hell and one day I won’t be. You Can Achieve Anything!

Getting back into the action genre is like going back home. It’s great.

I was brought up as an only child, and we were very close. But when I was 14, we got evicted. We came home to a padlock, and I looked up at my mom and she was crying, and there was nothing to do.

In business, you take a swing and you hope that you hit a home run, but sometimes you strikeout. Strikeouts and failures are important. Being down, getting punched in the gut every once in a while my life and coming back up, that’s an accomplishment.

The fact of the matter is this: Austin can take his ball, and go home. But as far as The Rock is concerned, as far as I’m concerned, this is home.

The Rock Quotes on Strength

My mom cleaned toilets for a long time, and she’d seen a lot of terrible things, but she was still the strength of our family. And there are women like that all across the country – all around the world – who show that type of fortitude.

The Rock Quotes About Challenges

As you step every day and we’re going to see challenges, we going to see failures, we should certainly learn from the failures and be gracious with our successes too as well.

The challenges that I face today are the same challenges we all face. Trying to balance your life between work, family, loved ones, your husband, your wife or boyfriend or girlfriend. If you have kids and balancing that, balancing your work with the time you spend with your kids. The idea of wanting to be a good parent and then the motivation to be a great parent. Whether you’re black, white, any color. Rich, poor, regardless of religion, cousins of culture, we go through those. We have the same challenges.

Any athlete or an actor who’s preparing for a long time to step on a stage or step on a field or step on a movie set, who suffers an injury right before you’re getting ready to perform or to execute – it is a massive challenge that’s thrown your way that you didn’t expect.

We all love challenges.

The Rock Quotes About Goals

The goal with me and the way I challenge myself as an actor is to go from genre to genre. I like that. A lot of actors always challenge themselves. But for me, the challenge lies not only in getting better, but going from drama to comedy to action or whatever the case may be, and having a wide array of movies in terms of my filmography.

My goal was never to be the loudest or the craziest. It was to be the most entertaining.

You like to live life without regret but that’s what the good Lord intended for me – that’s just the way it was. My goal was to make it in the NFL, I played with a lot of great players in college who went on to have illustrious, incredible careers and in the end, it just didn’t happen for me. I failed at that.

The goal [of mine] was always to work in as many different genres as I possibly could.

The Rock Quotes about Sports

The Rock is, without a shadow of a doubt, the most electrifying man in sports entertainment today.

I liked his ability to deal with a lot of the negativity that surrounded him. Even though he was in a world that he didn’t want to be in, he still saw the bigger picture.

BLOOD, SWEAT & RESPECT. First two you GIVE. Last one you EARN.

That’s a traditional Samoan dance. I was lucky that I was able to fly my cousins, who are professional dancers, up from Hawaii and they were able to be in the movie with me. We had a great time.

I love making movies, but there’s nothing like performing live.

I’ve always loved the showmanship of professional wrestling. While I love making movies, I love that platform, too.

If I love you, I show you I love you every day. Little things, big things.

Dwayne Johnson Quotes on “if you Smell” :

If you smell what The Rock’s cooking

Motivational Quotes by The Rock

Success isn’t overnight. It’s when every day you get a little better than the day before. It all adds up.

BLOOD, SWEAT & RESPECT. First two you GIVE. Last one you EARN.

Don’t be afraid to be ambitious about your goals. Hard work never stops. Neither should your dreams.

Short Dwayne Johnson Quotes on Past

I always keep moments that were defining for me in my past and challenged me in my past from getting evicted out of my apartment when I was 14 years old, to being cut from the CFL [Canadian Football League] and only having 7 bucks in my pocket, to bouts with depression and I keep moments like that very close to me because it continues to be great motivators for me. It helps keep me grounded, and it’s a good reminder of how things work, and I never want to go back to that.

I think there are a number of things that you can do to encourage your kids’ dreams but I do believe in speaking by the experience of having a lot of help along the way, stumbling in the past. We’ve all stumbled and we certainly all deserve to get up and walk again.

I like to use the hard times of the past to motivate me today.

Short The Rock Quotes on GI.Joe

That’s an interesting choice of a joke. Of all the things you could say…

My first drop, I popped a live round into my mouth. It keeps your teeth from chattering. Give it a shot.

Whatever deity may guide my life, dear lord doesn’t let me die tonight. But if I shall before I wake, I’d accept my fate

The Rock Quotes about Hard Work

If you’ve ever been hungry then you’ll never be full and I know what it’s like to be hungry. When I was 13, I realized I could control my destiny through hard work. I had my hands and I was going to work my ass off, I was going to initiate and create some sort of the change in my life.

I’ve learned over the years that when it comes to success, consistency is key. Consistent hard work that we may not like doing today, but for a payoff, we’ll love tomorrow. Earn it. Enjoy it.

Don’t be afraid to be ambitious about your goals. Hard work never stops. Neither should your dreams.

Success isn’t overnight. It’s when every day you get a little better than the day before. It all adds up.

In 1995 I had $7 bucks in my pocket and knew two things: I’m broke as hell and one day I won’t be. You Can Achieve Anything!

Think back 5 yrs. ago. Think of where you’re at today. Think ahead 5 yrs. and what you want to accomplish. Be Unstoppable.

Success at anything will always come down to this: focus & effort. And we control both.

he first steps to achieving your goal is to take a moment to respect your goal. Know what it means to you to achieve it.

Short The Rock Quotes on Opportunity

When you walk up to opportunities door, don’t knock it… Kick that B*tch in, smile and introduce yourself

There was a time in my life when opportunities were so few and far between they were like little cracks in the wall, and if one opportunity came my way, I would scratch and claw and bite and I would do anything I could to make sure that I grabbed that opportunity by the throat and I did not let it go.

In life, we get an opportunity to do some cool things and some things that are fun and that we like doing.

There’s something very cool as an actor when you have an opportunity to play somebody who’s real, whether they’re still alive or not, but who has lived a life.

You wanna do this…you wanna go right now…do you want to, GO? then go get The Rock a bologna sandwich because this doesn’t concern you.

Now go back to Supercuts and get your $5 back jabroni!

And then all of a sudden, you’re doing jumping jacks, you’re happy because Kane can talk. The Big Red Retard can finally speak.

The Rock Quotes On Working out

The men I idolized built their bodies and became somebody – like Sylvester Stallone and Arnold Schwarzenegger – and I thought, ‘That can be me.’ So I started working out. The funny thing is I didn’t realize back then that I was having a defining moment.

What’s the key to success? The key is, there is no key. Be humble, hungry, and the hardest worker in any room

There’s no substitute for hard work and getting out there and busting your butt at whatever it is. Nothing comes easy. You can overcome so much just through hard, focused work

Not the first time you sent a girl running out of the room screaming.

All right, listen up. The men we’re after are professional runners. We find them; we take them as a team and we bring them back. And above all else, we never ever let them get into cars.

There’s your cot, don’t jack off on my sheets.

The jabroni beating, pie eating, trail-blazing’, eyebrow raisin’, all around, smack it down People’s Champ, The Rock!

The jabroni beating, pie eating, trail-blazing’, eyebrow raisin’, all around, smack it down People’s Champ, The Rock!

The Jabroni beating, pie eating, trailblazing, eyebrow-raising, the BEST in the present, future and past, and if you don’t like me…. you can kiss The People’s ass!

The Rock is gonna go thru Triple H like Ex-Lax goes thru his fat ass mama!

Let The Rock remind you of something. You ain’t no superhero. Not like the Scorpion King.

He was big. He was hairy. He smelled like rotten testicles.