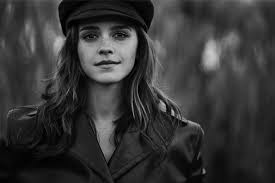 I could be 100 years old and in my rocker, but I’ll still be very proud that I was part of the ‘Harry Potter’ films.

People associate feminism with hate – with man hate – and that’s really negative. I don’t think that’s what feminism is about at all – it’s really positive. I think that’s why women became reluctant to use the word.

Harry Potter’s like Santa Clause: something you can’t see but wish was real so badly that you end up believing in it.

You might be thinking who is this Harry Potter girl? And what is she doing up on stage at the UN. It’s a good question and trust me I have been asking myself the same thing. I don’t know if I am qualified to be here. All I know is that I care about this problem. And I want to make it better.

You might be thinking who is this Harry Potter girl? And what is she doing up on stage at the UN. It’s a good question and trust me I have been asking myself the same thing. I don’t know if I am qualified to be here. All I know is that I care about this problem. And I want to make it better.

I was working on ‘Harry Potter’ while I was growing up, and the attention it brought me made me feel quite isolated.

It sounds so geeky, but I really do like studying and reading, and if I’m not working on ‘Harry Potter,’ then my greatest relaxation is to sit with a book.

I would love to not date someone in the same industry as me. Otherwise it becomes what it means to everyone else.

To be honest, I’ve always had far too much freedom. I had a job when I was 10. I started living on my own when I was 17 or 18. I’ve earned my own money; I’ve traveled the world. What would I rebel against? I’ve had so much freedom, sometimes it was hard. My parents wanted to protect me, but they had no idea how to. I had to learn as I went and make my own mistakes. I went from being totally unknown and never acting professionally to being in a major movie and being very famous. It all happened so quickly, I didn’t have any time to work things out. It’s been pretty scary at times.

Harry Potter is not twilight, you know; we’re not selling sex.

this kiss between Hermione and Ron is highly anticipated, it’s been building up for eight films now. and harry potter is not twilight, you know; we’re not selling sex.

HOW CAN WE EFFECT CHANGE IN THE WORLD WHEN ONLY HALF OF IT IS INVITED OR FEEL WELCOME TO PARTICIPATE IN THE CONVERSATION?

IT IS TIME THAT WE ALL SEE GENDER AS A SPECTRUM INSTEAD OF TWO SETS OF OPPOSING IDEALS.

I decided I was a feminist and this seemed uncomplicated to me. But my recent research has shown me that feminism has become an unpopular word. Apparently I am among the ranks of women whose expressions are seen as too strong, too aggressive, isolating, anti-men and, unattractive.

It’s difficult on my dating life, because anyone I get photographed with is automatically my boyfriend. So it just makes it look as if I’ve had, like, 6,000 boyfriends!

I HAVE REALIZED THAT FIGHTING FOR WOMEN’S RIGHTS HAS TOO OFTEN BECOME SYNONYMOUS WITH MAN-HATING. IF THERE IS ONE THING I KNOW FOR CERTAIN, IT IS THAT THIS HAS TO STOP.

No country in the world can yet say they have achieved gender equality.

We are STRUGGLING FOR A UNITING WORD BUT THE GOOD NEWS IS THAT WE HAVE A UNITING MOVEMENT.

Gender equality, historically has been predominantly a women’s movement for women. But I think the impact of gender inequality and how it’s affecting men hasn’t really been addressed.

Who here actually thinks I would do Fifty Shades of Grey as a movie? Like really. For real. In real life…? … Good. Well that’s that sorted then.

Don’t feel stupid if you don’t like what everyone else pretends to love.

Emma Watson Quotes on Equality
Gender equality, historically has been predominantly a women’s movement for women. But I think the impact of gender inequality and how it’s affecting men hasn’t really been addressed.

I think that why the research and the data are so important is because you become so used to seeing the world one way that you don’t even notice anymore. [Gender inequality] has this invisibility.

We want to end gender inequality, and to do this, we need everyone involved…We want to try to galvanize as many men and boys as possible to be advocates for change and we don’t just want to talk about it. We want to try and make sure that it’s tangible.

Emma Watson Quotes if Not Me
If not me- who? If not now- when?

Emma Watson Quotes on Feminism
We don’t often talk about men being imprisoned by gender stereotypes but I can see that that they are and that when they are free, things will change for women as a natural consequence.

I’ve never wanted to grow up too fast. I wanted to wear a sports bra until I was 22! … The allure of being sexy never really held any excitement for me. I’ve never been in a terrible rush to be seen as a woman.

If I had it my way, I would have just kept it short forever. Of course, men like long hair. There’s no two ways about it. The majority of the boys around me were like, ‘Why did you do that? That’s such an error.’ And I was like, ‘Well, honestly, I don’t really care what you think!’ I’ve never felt so confident as I did with short hair – I felt really good in my own skin.

For the record, feminism by definition is: ‘The belief that men and women should have equal rights and opportunities. It is the theory of the political, economic and social equality of the sexes.’

Emma Watson Quotes on Acting
I had been doing something for more than half of my life that I wanted to continue doing – I really loved making the film and I really love acting and it is what I want to do.

Acting is telling the truth under imaginary circumstances. I cannot think of a worse way to describe acting. Also, I’m the worst liar ever.

Acting never was about the money for me… Maybe in 10 years, I’ll be able to appreciate the fact that I am financially stable and independent and I don’t have to make bad choices. I can be very picky.

I went from being totally unknown and never acting professionally to being in a major movie and being very famous. It all happened so quickly, I didn’t have any time to work things out. It’s been pretty scary at times.

Emma Watson Quotes on opportunity
Men, I would like to take this opportunity to extend your formal invitation. … Gender equality is your issue, too. … I’ve seen young men suffering from mental illness, unable to ask for help, for fear it would make them less of a men—or less of a man. I’ve seen men made fragile and insecure by a distorted sense of what constitutes male success. Men don’t have the benefits of equality, either.

For the record, feminism by definition is: ‘The belief that men and women should have equal rights and opportunities. It is the theory of the political, economic and social equality of the sexes.’

Being asked to serve as UN Women’s Goodwill Ambassador is truly humbling. The chance to make a real difference is not an opportunity that everyone is given and is one I have no intention of taking lightly. Women’s rights are something so inextricably linked with who I am, so deeply personal and rooted in my life that I can’t imagine an opportunity more exciting. I still have so much to learn, but as I progress I hope to bring more of my individual knowledge, experience and awareness to this role.

As wonderful as charity is, that money runs out. It’s not sustainable. It lasts for a certain period of time and it’s gone. What i really think people need is the opportunity to help themselves.

Emma Watson Quotes on Harry Potter
I definitely wouldn’t want Harry Potter to be the last thing I do.

With ‘Harry Potter,’ I’ve been all over the world. I probably wouldn’t have gone to New York so young if it weren’t for the films.

If I hadn’t done ‘Harry Potter,’ I would have gone and done years of art. I really do love it, and I’d love to write.

I can be 100 years old but I will always be proud to say I was in Harry Potter.

Emma Watson Quotes about Books
I like books that aren’t just lovely but that have memories in themselves. Just like playing a song, picking up a book again that has memories can take you back to another place or another time.

I truly, truly believe that beauty comes from within.

Emma Watson Quotes on Love
I love painting and have a need to do it.