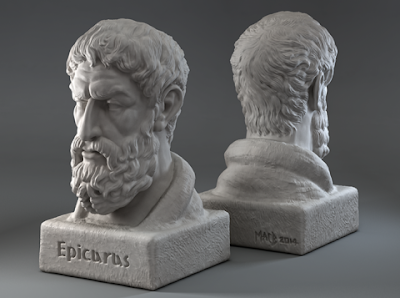 Is he neither able nor willing? Then why call him God?

Is he able, but not willing? Then he is malevolent.

A free life cannot acquire many possessions, because this is not easy to do without servility to mobs or monarchs.

Accustom yourself to believe that death is nothing to us, for good and evil imply awareness, and death is the privation of all awareness; therefore a right understanding that death is nothing to us makes the mortality of life enjoyable, not by adding to life an unlimited time, but by taking away the yearning after immortality. For life has no terror; for those who thoroughly apprehend that there are no terrors for them in ceasing to live.

Death, the most dreaded of evils, is therefore of no concern to us; for while we exist death is not present, and when death is present we no longer exist.

Not what we have But what we enjoy, constitutes our abundance.

It is possible to provide security against other ills, but as far as death is concerned, we men live in a city without walls.

Let no young man delay the study of philosophy, and let no old man become weary of it; for it is never too early nor too late to care for the well-being of the soul.

Where I am death is not, where death is I am not.

Neither one should hesitate about dedicating oneself to philosophy when young, nor should get tired of doing it when one’s old, because no one is ever too young or too old to reach one’s soul’s healthy.

If you would enjoy real freedom, you must be the slave of Philosophy.

Launch your boat, blessed youth, and flee at full speed from every form of culture.

It is not so much our friends’ help that helps us, as the confidence of their help.

Of all the things which wisdom provides to make us entirely happy, much the greatest is the possession of friendship.

Of all the gifts that wise Providence grants us to make life full and happy, friendship is the most beautiful.

Of all the means to ensure happiness throughout the whole life, by far the most important is the acquisition of friends.

If God listened to the prayers of men, all men would quickly have perished: for they are forever praying for evil against one another.

A strong belief in fate is the worst kind of slavery; on the other hand, there is a comfort in the thought that God will be moved by our prayers.

Death is nothing to us, since when we are, death has not come, and when death has come, we are not.

Death does not concern us, because as long as we exist, death is not here. And when it does come, we no longer exist.

The art of living well and the art of dying well are one.

Death does not concern us, because as long as we exist, death is not here. And when it does come, we no longer exist.

The fool’s life is empty of gratitude and full of fears; its course lies wholly toward the future.

Pleasure is the beginning and the end of living happily.

The greater the difficulty, the more the glory in surmounting it.

There are infinite worlds both like and unlike this world of ours. For the atoms being infinite in number… are borne on far out into space.

When someone admits one and rejects another which is equally in accordance with the appearances, it is clear that he has quitted all physical explanation and descended into myth.

All other love is extinguished by self-love; beneficence, humanity, justice, philosophy, sink under it.

Let no one delay the study of philosophy while young nor weary of it when old.

Luxurious food and drinks, in no way protect you from harm. Wealth beyond what is natural is no more use than an overflowing container. Real value is not generated by theaters, and baths, perfumes or ointments, but by philosophy.

In a philosophical dispute, he gains most who is defeated, since he learns most.

Either God wants to abolish evil, and cannot; or he can and does not want to.

If, as they say, God can abolish evil, and God really wants to do it, why is there evil in the world?