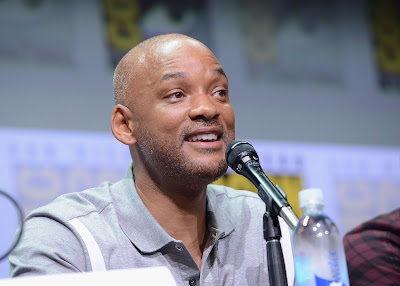 I love producing. I am loving doing that. I think that is my most natural space in the business. I just love producing or editing and that’s where I thrive.

You know the difference between you and me? I make this look good.

Stop letting people who do so little for you control so much of your mind, feelings and emotions

Unlimited technology from the whole universe, and we cruise ’round in a Ford P.O.S.

That’s what I call a close encounter.

You’d be surprised how a nice pair of edible panties can make you feel sexy.

It was at that time that I thought about Thomas Jefferson writing that Declaration of Independence. Him saying that we have the right to life, liberty, and the pursuit of happiness. And I thought about how he knew to put the ‘pursuit’ in there, like no one can actually have happiness. We can only pursue it.

Will Smith Quotes about Happiness

One day you’ll laugh at the problems you have today.

Stop letting people who do so little for you control so much of your mind, feelings & emotions.

Smiling is the best way to face every problem, to crush every fear, and to hide every pain.

Will Smith Quotes from Movies

Every moment in life is a learning experience. Or what good is it, right?

I really don’t think they flew 90 billion light years to start a fight and get all rowdy.

Gordon, when you tell this story to your grandkids, you be sure to leave this part out.

Will Smith Quotes about Treadmill

The only thing that I see that is distinctly different about me is I’m not afraid to die on a treadmill. I will not be out-worked, period. You might have more talent than me, you might be smarter than me, you might be sexier than me, you might be all of those things you got it on me in nine categories. But if we get on the treadmill together, there’s two things: You’re getting off first, or I’m going to die. It’s really that simple, right? You’re not going to out-work me. It’s such a simple, basic concept. The guy who is willing to hustle the most is going to be the guy that just gets that loose ball. The majority of people who aren’t getting the places they want or aren’t achieving the things that they want in this business is strictly based on hustle. It’s strictly based on being out-worked; it’s strictly based on missing crucial opportunities. I say all the time if you stay ready, you ain’t got to get ready.

Realistic Quotes by Will Smith
Being realistic is the most common path to mediocrity.

Will Smith Quotes about Don’t Chase
Don’t chase people. Be yourself, do your own thing and work hard. The right people – the ones who really belong in your life – will come to you. And Stay.

Short Funny Will Smith Quotes
The only man you will ever get is some fool named Grady who falls asleep in his soup.

Correct me if I’m wrong, but isn’t driving around on a bus and having a campfire kind of adding to the environment problem?

The execs don’t care what color you are. They care about how much money you make. Hollywood is not really black or white. It’s green.

Just because the kid’s cute, doesn’t mean you’re not the father.

Will Smith Quotes on Fear
Fear is not real. It is a product of thoughts you create. Do not misunderstand me. Danger is very real. But fear is a choice.

Will Smith Quotes about Working Hard
Don’t chase people. Be yourself, do your own thing and work hard

Don’t chase people. Be yourself, do your own thing and work hard. The right people – the ones who really belong in your life – will come to you. And Stay.

The separation of talent and skill is one of the largest misconceptions in modern society. Talent is something you born with, but skill can only be attained through Hours and Hours of hard work perfecting your talent as a craft. Which is why Talent will fail you without skill.

Will Smith Quotes from Hitch
No matter what, no matter when, no matter who, any man has a chance to sweep any woman off her feet. He just needs the right broom.

I just know that I want to be… Miserable. Like, *really* miserable. But hey, if that’s what it takes for me to be happy, then… Wait, that didn’t come out right.

from bad company. If you must cheat, cheat death. And if you must drink, drink in the moments that take your breath away

Never lie, steal, cheat, or drink. But if you must lie, lie in the arms of the one you love. If you must steal, steal away.

Will Smith Quotes about Daughter
Boys laugh at what they put girls through – but they won’t be laughing when – they’re wiping tears off their daughters face for the same reason.

Will Smith Quotes About Success
You can cry, ain’t no shame in it.

Whatever your dream is, every extra penny you have needs to be going to that.

Money and success don’t change people; they merely amplify what is already there.

We spend money that we do not have, on things we do not need, to impress people who do not care.

Will Smith Quotes on Friendship
Look at Your 5 Closest Friends. Those 5 Friends Are Who You Are. If You Don’t Like Who You Are Then You Know What You Have to Do.

Will Smith Quotes on Money
Money & success don’t change people; they merely amplify what is already there.

Will Smith Quotes on Struggle
It’s been rough for me trying to find my position in the struggle and where my voice is needed and helpful. You know, I grew up in Philadelphia, and Philadelphia has a really rough police-brutality history. I grew up in a neighborhood where it was very clear that the police were “them” and we were “us”.

Never underestimate the pain of a person, because in all honesty, everyone is struggling. some people are better at hiding it than others.

Will Smith Quotes on Relationship
The central idea of love is not even a relationship commitment; the first thing is a personal commitment to be the best version of yourself with or without that person that you’re with. You have to every single day-mind, body, and spirit-wake up with a commitment to be better.

Will Smith Quotes from Pursuit of Happiness
This part of my life… this part right here? This part is called “being stupid.

This part of my life… this part right here? This is called “happiness.

Will Smith Quotes on Friends
When you look around at the six people that you spend the most time with, that’s who you are. I think that in making those decisions in who you are going to be married to, who your friends are going to be, those are really huge, critical, life decisions. Who gets to talk to you everyday, is almost like the food that you eat. It is a very huge critical situation to choose who the people are that you are spending your life with, spending your time with and who you are choosing to give your love and everything to.

The way I like to measure greatness is… How many people can you make want to be better?

Greatness exists in all of us.

Greatness is not this, wonderful, esoteric, elusive, god-like feature that only the special among us will ever taste. You know? It’s something that truly exists, in, all of us. It’s very simple, this is what I believe, and, I’m willing to die for it. Period. It’s that simple.

Will Smith Quotes about Life
If we each get on a treadmill right now, one of two things is going to happen… either you’re going to get off first or I am going to die. Period.

Whatever your dream is, every extra penny you have needs to be going to that.

We spend money that we do not have, on things we do not need, to impress people who do not care.

I want the world to be better because I was here. I want my life, I want my work, my family, I want it to mean something and if you are not making someone else’s life better then you are wasting your time.

We all want to be in love and find that person who is going to love us no matter how our feet smell, no matter how angry we get one day, no matter the things we say that we don’t mean.